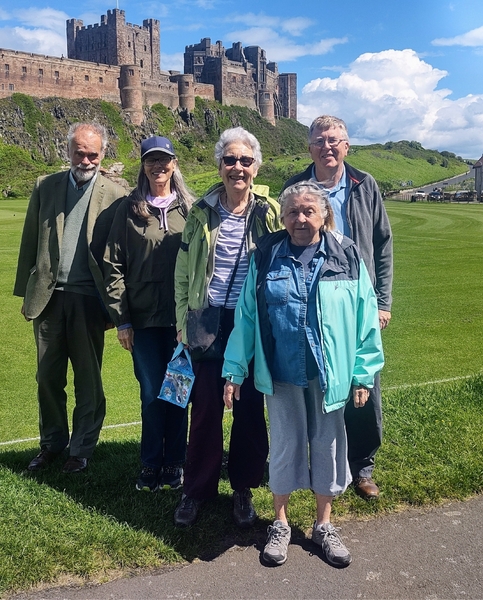 By Monday midday, the tide had receded sufficiently to allow our pilgrim group to cross the causeway in safety to the Holy Island of Lindisfarne and we settled into Marygate House, our base for the week. There was time to unpack and introduce ourselves over a cup of tea before our leader Steve drove us to the mainland so we could walk back to the island across the Pilgrims Way, following the poles across what becomes the seabed when the tide comes back in. Four of us tackled the sands, while one walked along the road causeway. Two chose traditional bare feet, while two used appropriate(?) footwear. Setting off across the sands, we occasionally had to paddle in a few inches of sea water but in patches where mud replaced sand the going was a bit more treacherous. One of us (yes, me) managed to slip over but the only damage was to my dignity and a pair of muddy shorts. We passed a couple or refuges whose ladders looked a bit dodgy but I am sure we could have scaled them if necessary. Barnacle growth on the guide poles indicated how high the sea level would be when the tide came in. As we neared Lindisfarne, the "singing" of seals on a nearby sandbank grew louder, quite an eerie sound. The sands walkers and road walker reached terra firma at about the same. As I also had a car on the island, we didn't have to make Steve walk back again to collect his! Our first day was a great start to the week, with one of the highlights ticked off.

We had the services of local guide Mary Gunn from Holy Island Hikes on Tuesday morning for a fascinating walk around the village and harbour area. Safe crossing times meant that only a few early-bird day trippers had made it across the causeway so the island was comparatively quiet. Mary was a mine of information about the island, its secular, Christian and natural history, and also present-day life. The afternoon's weather forecast was not brilliant, so we decided to drive into Alnwick. Parking at Barter Books, we browsed the shelves and some even made a purchase. This second-hand book shop is housed in what was the terminus of the Alnwick branch line and retains many of the original station features - including the buffet which we made good use of. Alnwick is an interesting town, the former county town of Northumberland associated with the Percy family. Our Marygate hosts had told us of the White Swan Hotel which has the dining room removed from the RMS Olympic when it was scrapped. The Olympic was the sister ship of Titanic and the White Swan's dining room has been used in films to represent the famous ship. When Robert Ballard found fittings around the Titanic wreck he used the lounge as a reference. Our group boldly entered the hotel dining room and a staff member was happy to take our photo - in more opulent surroundings than a typical Journeying venue!

Thursday saw us crossing to the mainland again to visit Bamburgh, which has important links with St Aidan. King Oswald was based in Bamburgh and when he wanted to re-introduce Christianity to the North-East he employed Aidan, a monk from Iona, who established a monastery on Lindisfarne in 635. Remains from this time were destroyed by Vikings, and the extensive castle that we explored dates from Norman times, with many later additions. While Steve chose to occupy the recreation of an Anglo-Saxon stone throne looking out towards Lindisfarne, a couple of us surfs enjoyed the same view while confined to the stocks! After visiting the fourteen rooms in the castle we had lunch in the village beneath its walls and popped into the RNLI Grace Darling Museum, telling the story of the lifeboat heroine's life and her part in the amazing rescue of nine shipwrecked survivors off the Farne Islands in 1838. Then, over the road to St. Aidan's church. St Aidan died in 651, said to be leaning against a wooden prop supporting his monastic cell, traditionally identified with a Y-shaped beam now high up in the church ceiling. The supposed site of Aidan's death is marked by a shrine installed in 2013. There was enough time remaining to find St Cuthbert's Cave, although I suspect some of the group wondered if we would ever get there. Steve patiently followed my navigation which led us down ever narrowing country roads which finally deteriorated into a dead-end farm track. Retracing our steps, and consulting a proper OS map, we arrived at the car park and set off on a short uphill walk to find "Cuddy's Cave" in a woodland clearing. After his death in 687, Cuthbert was buried on Lindisfarne but the monks took his remains on walkabout when Viking raiders threatened the island. The cave is said to be where monks and body rested on the first night. The life-size sculpture "Journey" in St Mary's church on Holy Island depicts the monks carrying St Cuthbert's coffin to safety. We sampled some local culture that evening when Andy and Margaret Watchorn gave a concert playing Northumbrian Smallpipes and fiddle in the island community centre. Their chat between playing gave lots of information about the instruments and tradition. The concert had an international flavour when Margaret played the Nyckelharpa, a Swedish"fiddle" where keys are depressed to change the pitch of the strings. Google it if you want to know more.

Mary Gunn took us out again on Thursday morning, this time walking to the dunes and coast at the north end of the island. Her botanic knowledge pointed out many plants, including Early Marsh Orchid and Northern Marsh Orchid. Also, the invasive Pirri-pirri bur from New Zealand, with warning signs to remove burrs from clothing and dogs to prevent it spreading off the island. Birdlife included eider or "Cuddy" ducks (with the first chicks Mary had seen this year), oystercatchers, lapwings, cormorants, a lone gannet and, perhaps best of all, fulmars swooping past us on the cliffs. For the paleontologists, Mary teased some crinoid fossils out of the cliffs, also known as St Cuthbert's beads or Cuddy beads as they were strung together as necklaces or rosaries in medieval Northumbria. It seems that you can't go far on Lindisfarne before encountering some reference to Cuthbert! A free afternoon left us to revisit favourite island spots, discover new ones, or browse the shops. I found the Lindisfarne Gospel Garden at Marygate to be a quiet, sunny spot for contemplation.

Throughout the week, many of us walked the short distance to St Mary's church for morning prayer. The chirping of sparrows flying to and from their nests between the stones of the church wall making a lovely prelude to our time of worship. On the final morning, Sam (curate as well as one of our Marygate hosts) said a special prayer for those who were leaving the island as a blessing to see us on our way. We bade farewell to our hosts Don & Sam, thanking them for their hospitality and some excellent meals. It was finally time for our pilgrim group to leave the island, eventually making for London, Southampton, Bristol and Florida - although everyone was taking the opportunity to stop somewhere else or visit friends. In my case, it was a couple of hours in Durham for my first visit to the Cathedral. This was, appropriately, the place where those monks ended up after carrying Cuthbert's coffin for seven years - a journey which took me less than two hours. Cuthbert's elaborate shrine behind the High Altar was destroyed in the Reformation, later replaced by a simple marble slab inscribed 'Cuthbertus' which is surely more fitting to the saint's lifestyle. Despite there being quite a few visitors, I had a few moments alone at the shrine to reflect on the past week. If in Durham, the Cathedral's "Treasures of St Cuthbert" exhibition is a must, containing his original 7th century coffin, his gold and garnet pectoral cross, the portable altar & ivory comb placed in his coffin, and embroidered Anglo-Saxon vestments gifted to his shrine. If you cant get there in person this YouTube video is the next best thing

Covid had changed the way that Marygate House was operating, so thanks to Steve for making last minute changes which ensured that our visit, although shortened and with less people, could go ahead. 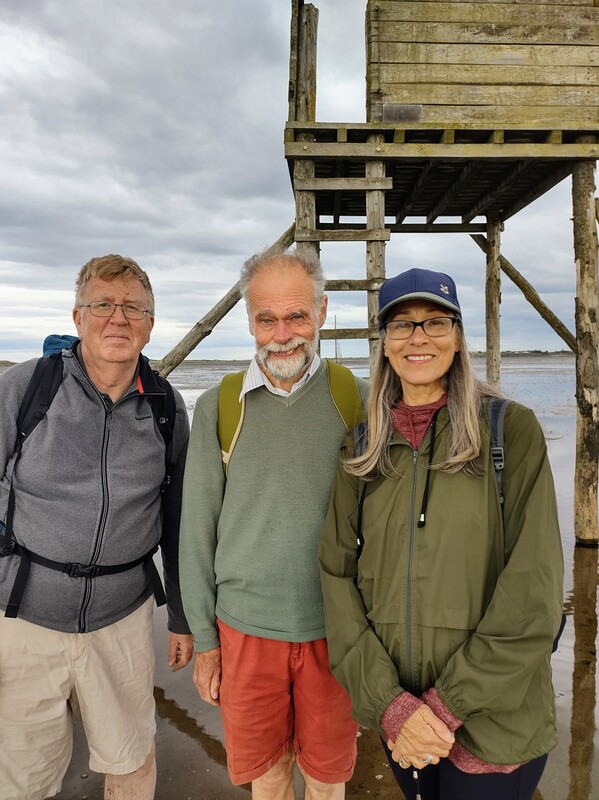 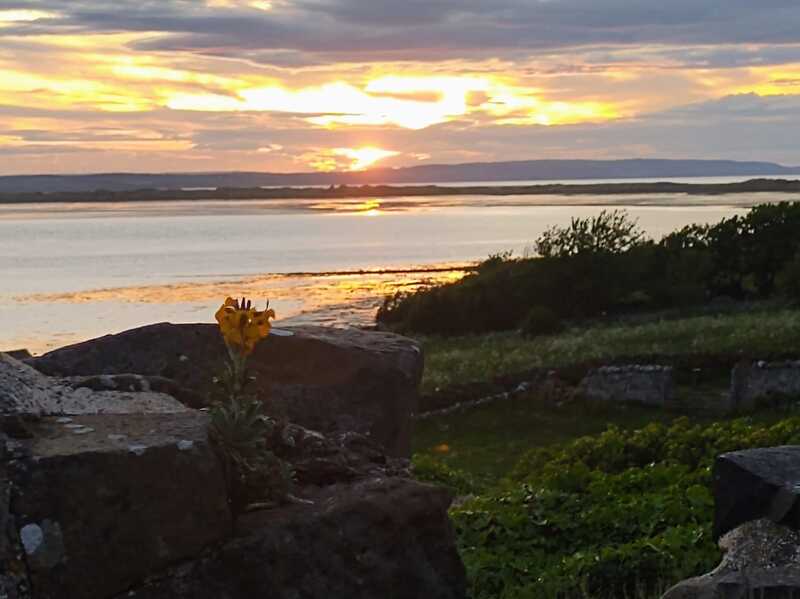 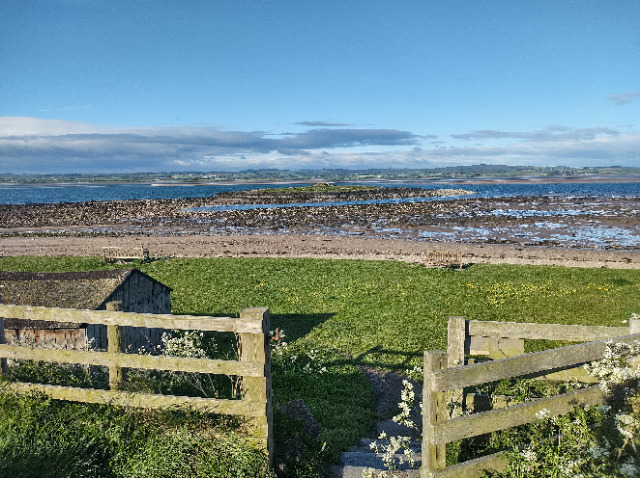 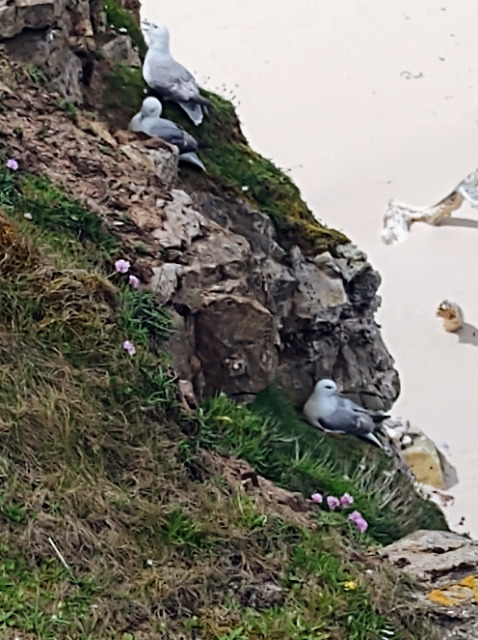