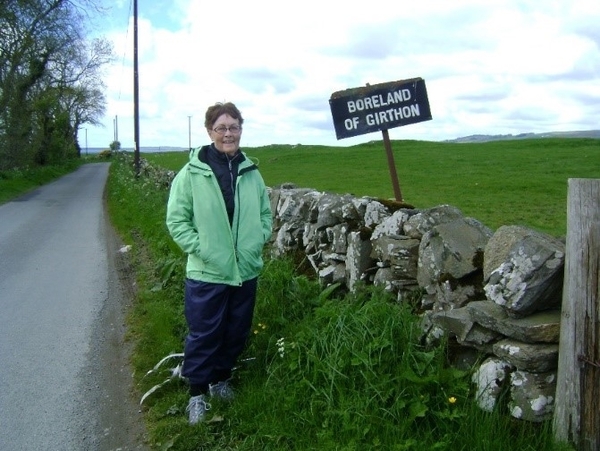 Not long after the Gatehouse of Fleet walk was announced for May 2015, my friend Patricia and I made our booking, and because we were travelling from Western Canada and we knew it was imperative to make our plans early. This would be our second Journeying adventure, the first being to Iona and Mull in 2013 and we were eager to participate again.

I knew that my maternal grandfather, David Porter had come to Canada from Galloway in 1888 as a 9-year-old - Kirkinner Parish, Wigtown - to be exact, but I wasn't aware of any family connections in Dumfries on the east side of Wigtown Bay. Mere days before the tour was to begin, I was amazed to discover that his grandfather John Porter had farmed at Boreland of Girthon, according to the 1851 census, and his father William Porter grew up there. Imagine my amazement when I discovered family records from the Parish of Girthon and realized our accommodation for the week was directly across the road from the abandoned Girthon church and the church graveyard, and just a mile or two from the farm!

Later that week our walk took us right past the Boreland of Girthon farm gate! A photo was clearly in order - thank you for taking, Susan Fogarty, I treasure that picture!

Since that time, research into my family history has continued and earlier this summer I connected with Dr. John (Jack) Gordon who is likely my 6th cousin, as near as we can determine. When I sent him the photo of myself at the farm gate he promptly replied, saying that he waited for the school bus at that very spot when he was 6 years old and living at that same farm. He is a descendant of my great-great grandmother who was a Gordon. I am a descendant of my great-grandfather's side of the family and that is the farm where my great-grandfather, William Porter - previously mentioned - grew up.

I thought I would share this account with you to illustrate that God touches us in such a multitude of ways through Journeying - a retreat atmosphere, companionable walking, spiritual revelation, teaching of Celtic practice, people and places, and even surprising us by confirming our human connections in the most unplanned and unexpected of ways. And thus - through the working of the Holy Spirit our mighty, mysterious, and magnificent King of the Universe who is apparent with every step we take on a Journeying holiday is also confirmed as our personal and intimate Creator Redeemer of every minute of our lives... "when I was being made in secret....in your book all my days were already written; my days had been shaped before any of them existed." Ps. 139:15,16 (CJB). Yes - I believe in divine orchestration! As did, it seems - the ancient Celtic Christians.

The Journeying experience always becomes far bigger than possible to anticipate, and I thank each volunteer who is so faithful in contributing so much to planning and providing wonderfully varied walk options each year. May others be as blessed as I.