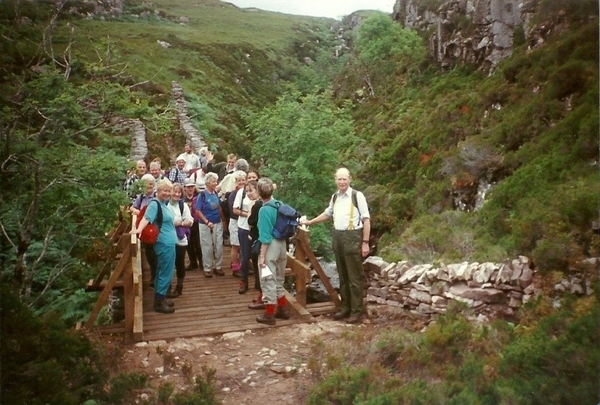 Journeying in Scotland is always wonderful!

This June, 2022, we explore the Islands of Mull, Ulva and Iona, and in 1997 it was the same! But on that occasion the journey began in Applecross on the shore of Wester Ross...

The view from on top of the treacherous 'Bealach-Na-Ba', the pass of the cattle, toward the small township of Applecross and the islands of Raasay and Skye, provides one of those classic Highland and Island, land and seascapes; rugged hills tumbling down to a turquoise sea with islands and mountains on the horizon - a view I first glimpsed, though without the colour, in the vintage film 'Laxadale Hall,' an endearing tale of a community determined to win its fight to be linked to the outside world by a road across the mountain.

Centuries earlier, long before 'Laxadale,' a much less fictional character made his way across the same pass. It was in his footsteps that we were to travel.

St Maelrubha landed on the shore of Wester Ross at Applecross in the year 673 - a mighty red bearded man who turned this little corner of Scotland into perhaps the second most important Christian settlement in the country. The first and better known was our eventual destination, the magical island of Iona.

A place to prepare, a place to begin a journey... this is Applecross - a sanctuary and staging post, lapped by the waters of the Inner Sound on one side and sheltered by craggy hills on the other. I loved this place.

Leaving the pilgrims to begin their journey, I returned south to Bristol with my eldest son Nick, aged eleven; to pick up son Will, aged seven; and daughter Emma, twelve.

A few days later, during the early evening, we re-joined the pilgrims who by now had reached Resipol camp on the shore of Loch Sunart; in readiness to travel to the Island of Mull the following morning. That night with rain falling from the August sky, dusk approaching, and the tent yet to be erected; the four of us opted to spend the night in the car.

An early start - had we ever slept!? With two minibuses and car packed with tents, baggage and pilgrims, we drove east in the warm morning sunshine, to Lochaline and the Mull ferry.

First on and first off, that was us - but on this occasion, only just! A faulty fuel gauge brought bus number one to a juddering halt a few yards clear and thankfully to the side, of the boats sloping 'gangplank' with its teeming stretch of cars heading for a day on the isle - a few moments earlier and it would have been so much worse! Towing one with the other, the two buses plus car made slow progress toward the top of the hill, eventually arriving in camp close to lunchtime - or was it supper!?

As we neared the end of our journey and before the final crossing to Iona, I sat drinking a glass of wine with pilgrim leaders Chris and David, at a quayside table on the lovely island of Ulva. The scene was unhurried and pastoral. We spoke little, simply drinking in the atmosphere; a calm sea, a dog playing by the water's edge, mist hovering over the highest peaks and, could it be, the long leafy arm of a tomato plant waving at us from the doorway of the only public telephone box on the island - a combined telephone box and greenhouse! The aura of spirit and pastoral scene was instantly grounded in practical day-to-day life. The essence of pilgrimage in one simple lesson!