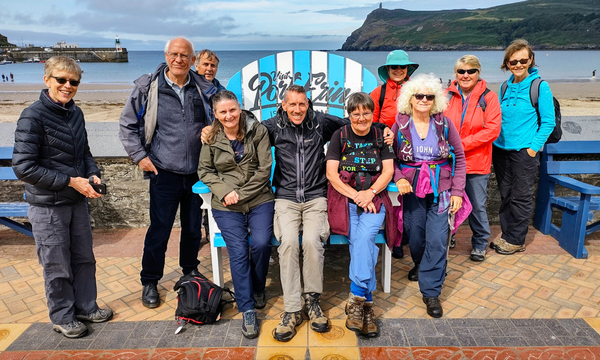 Saturday saw most of us arriving on the Island by air or sea, with our leaders transferring us to Peel on the west coast of the Island. Our group were housed in different properties overnight, but the Deanery was our base where we prepared & ate food, got to know each other, had times of prayer & reflection - and tackled a fiendish 1000 piece "turkey" jigsaw throughout the week!

Sunday morning offered a choice of churches for those who wished to join in communal worship. After lunch, Rosemary & Karen led us up to the viewpoint on Peel Hill and along the cliffs. Meanwhile, Phil had collected our final arrival from Douglas, and they caught us up along the coast path. Descending inland, we reached the site of Knockaloe Internment Camp where over 23,000 "aliens" were interned during the First World War. There is a special memorial to one of these, Josef Pilates who devised the popular exercise regime. The churchyard at nearby Patrick contains some graves of the internees. Karen provided some welcome refreshments in the Church before we returned to Peel alongside the River Neb.

Monday started with a short bus ride before walking up Glen Mooar to an ancient keeil, a small chapel building of earth and stone, dedicated to St Patrick. A peaceful site for a time of reflection which also has the remains of a hermit's cell. A short diversion took us to the spectacular Spooyt Vane (White Spout) waterfall before continuing to Kirk Michael, where the church houses an impressive collection of cross-slabs dating from the 7th to 11th centuries. Our walk ended with a pleasant stretch along the beach before returning on the bus to Peel.

An early start on Tuesday to catch the bus to Ramsey in the north east of the island, and then the Victorian electric tram to Ballajora. From here it was a short walk to Kirk Maughold Church, which also houses an important collection of Celtic crosses. St Maughold is said to have been set adrift from Ireland in a coracle after tricking St Patrick, coming ashore on the headland. The extensive churchyard is nearly four acres, and has the remains of several keills suggesting an early Christian monastery and the main pre-Norse religious community on the Isle of Man. After lunch, we walked out to the cliffs and Maughold's well where he is said to have climbed up to after landing and which is claimed, of course, to have healing properties. Whatever the legends, the well is truly a beautiful and "thin" place. We sat in silence for some minutes soaking up the peace and beauty around us, and listened to a poetic reflection. Walking northwards along the coast brought us to Ramsey and the return bus to Peel.

Wednesday involved another early bus into the Island's main town, Douglas, where we walked the length of the promenade, only stopping to pose for photos by the recently erected Bee Gees statue. The electric railway took us further along the coast to Laxey. From here, another electric tram took us to the summit of Snaefell, the island's only true mountain (i.e. above 2,000 feet). As we entered into low cloud, it became clear that we would not be seeing the "six kingdoms" that day - Man, England, Scotland, Wales, Ireland and the Kingdom of Heaven. Some of us made the short walk from the summit cafe to the trig point and radio masts, but all were glad that there was room on the next tram down! Back below the clouds, sandwiches were enjoyed in sunshine and we wandered down to the harbour and beach at Old Laxey before making the return to the Deanery by bus.

Back to Douglas on Thursday morning to catch the steam train south & west to Port Erin. It was a rainy journey on a packed train, but the sun came out as we drank coffee on the promenade. Our objective for the day was to climb up to the Milner's tower on Bradda Head. Views down to the Calf of Man were slightly obscured by mist, but some of the group caught glimpses of a pair of dolphins.
Back in Peel, we took advantage of a warm moonlit evening to walk around the castle and harbour, where a few seals were seen bobbing about.

Our last full day was to have been a high level hill walk, but the weather forecast didn't make this an appealing prospect. Instead, we travelled into St. John's to view Tynwald Hill, the ancient site of the Manx Parliament and still the centre for Manx National Day ceremonial. Our morning devotion was held in the adjacent church, where we sat in the named seats reserved for members of the House of Keys (Manx Parliament). The morning walk took us through the arboretum and along country roads & tracks, ending with a choice of cafe or craft shop. Many of us had donned waterproof trousers, and this ensured that the forecast rain held off!

A wet Saturday morning dawned, which perhaps softened the realisation that our stay was coming to an end. The local knowledge of our leaders, Phil, Rosemary & Karen, had ensured that the travel logistics went smoothly, and that we learned so much about life, both past and present, on the Island - and they provided some delicious meals! It had been wonderful to visit some ancient Christian sites where God has been worshipped for well over a thousand years, and to make spiritual connections. And on the material side we had discovered the delights of local Davison's ice cream - many "coffee stops" turned into "ice cream stops"!

Just as the first members of our group were about to leave for the airport, the one thousandth piece of that jigsaw was slotted into place. Perhaps an indication that our time together was also complete as we dispersed to continue our individual life journeys, accompanied by God and happy memories made within the group. 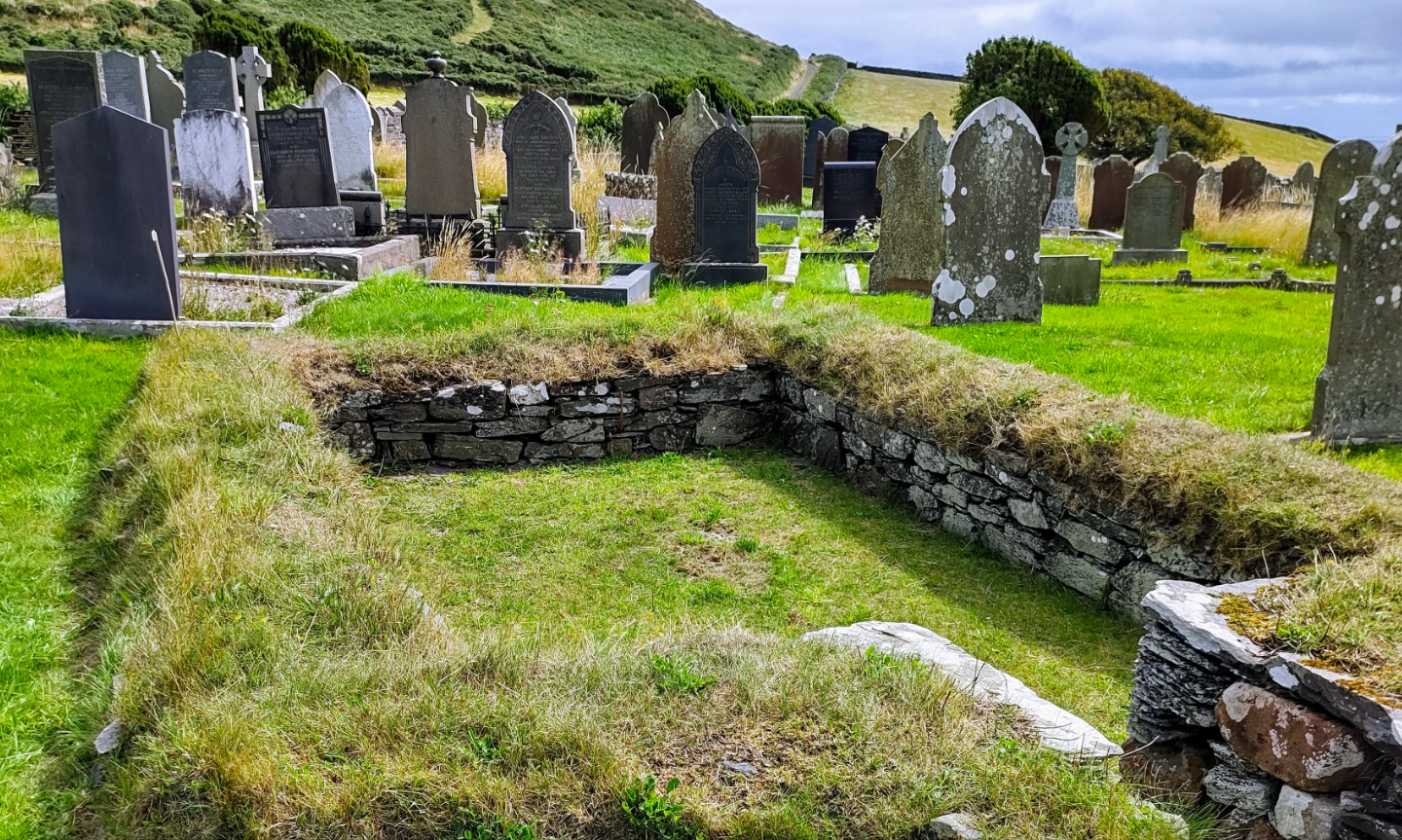 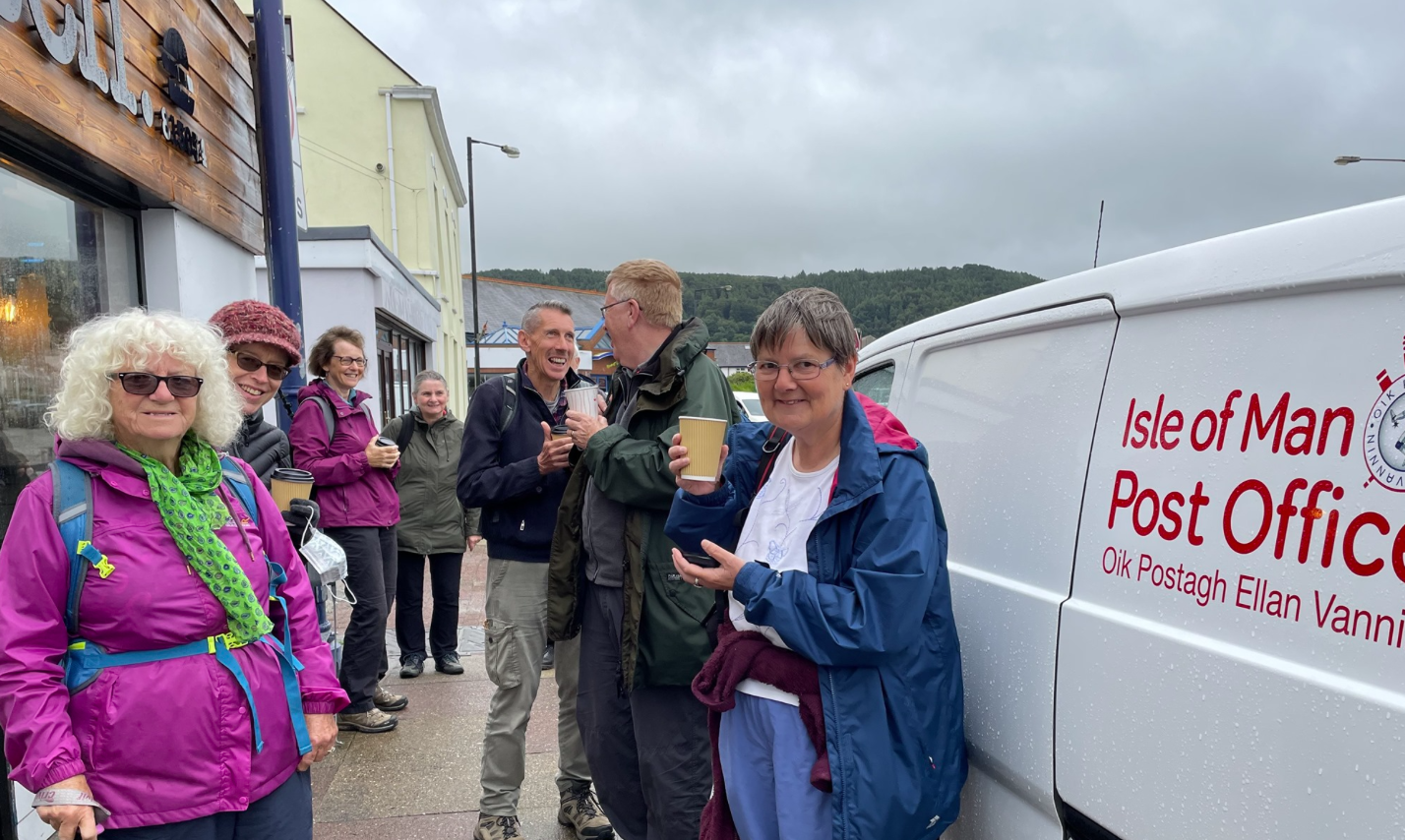