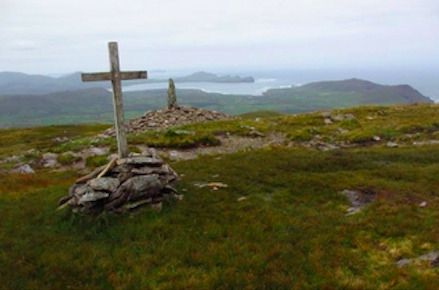 On the Holy Mountain

In June 2005, leaders Cate Macfarlane and Steve Evemy, travelled with a group to the West
of Ireland. They climbed Mount Brandon. These are Cate's thoughts on that climb...

Vast, immovable, haughty in her grandeur, the mountain drew us towards her. Soft and
rough, grey and green, she revealed more of her great expanse as we climbed ever upwards.
Reciting Brendan's Prayer, we remembered fellow pilgrims who had conquered different
trails on the towering rock.

Mount Brandon, on the south-west coast, in Dingle, Co. Kerry, is the second highest mountain in Ireland, 953 metres high. The ruins of St Brendan's Oratory mark the summit of the mountain. The legend is that the navigator saint climbed the mountain with his seafaring monks to prepare them physically and spiritually for their journey to the promised land of the saints.

Mount Brandon connects the wild and the holy. At the summit we encountered a swirling, whispering breeze. Enthralled we gazed about us: neighbouring peaks softly rounded and covered in green; tracks in the distance; the sky near enough to touch. Rivulets of crystal- clear water appeared and disappeared. Down in velvet green pastures, sheep stopped and stared. The shimmering sun visited us for a moment or two, then danced on her way. On the horizon was a vast, open sea and infinity, just as it had always been.

The rocks, jagged and smooth, purple and blue, held their secrets as we clambered among them. Our limbs ached, but we were refuelled from who knows where. We sang 'Do not be afraid' and we were not.

PRAYER OF ST. BRENDAN
"Help me to journey beyond the familiar
and into the unknown.
Give me the faith to leave old ways
and break fresh ground with You.
Christ of the mysteries, I trust You
to be stronger than each storm within me.
I will trust in the darkness and know
that my times, even now, are in Your hand.
Tune my spirit to the music of heaven,
and somehow, make my obedience count for You."