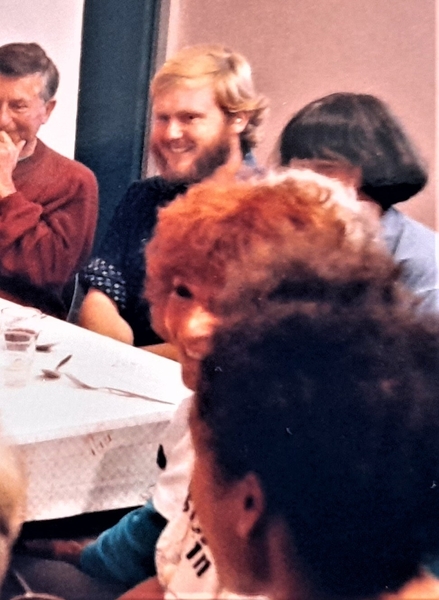 Marooned on a tidal island; rescued by a minibus driven through a rapidly rising tide; becalmed on a ferry with engine trouble; towed to shore by the rival firm! Our first journey to Ireland was to prove a time of high adventure...

Late afternoon, September 14th 1994, and twelve pilgrims are on board the old mail boat noisily pushing its way through a breezy sea toward St Colman's island home, Inishbofin, a few miles off the coast of County Galway. Midway through the voyage a sudden judder from the engines broke the friendly banter and craic of the travellers; we stood in unexpected silence, save for the wash of the sea against the hull and the cry of gull's overhead. We were adrift! The boat swayed, gently rising and falling on the rolling green of the sea. "It's run out of Guinness", a voice called from somewhere near the stern.

Time passed and then on the horizon, a boat coming towards us! "We're just going to get a tow off our neighbour there," a young crew member called from his vantage point on top the roof of the steering cabin, waving his two-way radio in the direction of the closing vessel. As the boat neared; ropes were flung in our direction. "Mind the wood!" an anxious Captain roared as we danced perilously close to our neighbour. A pair of hands reached far over the side and grasped the end of a sea-soaked rope. At length, we were strung out at a safe distance behind the slightly larger, slightly newer vessel and with a roar of our rescuer's engine we once more headed for the island.

The day had been a day of incidents. During the morning with time on our hands, we crossed the half-mile stretch of sand to the tidal island of Omey by minibus, with hopes of finding a buried Church. We enquired of a passer-by at what time the tide might turn? Assured that there was plenty of time we parked the bus on the edge of the sands and set off on foot across the island. As we walked the tide rose and when we returned to the bus, 'water, almost to the wheels!'

Richard, with shepherd's crook in hand and trousers rolled high, walked out into the sea, checking the depth as he went. Gently and in first gear we followed in the minibus. Half way out and with the water well above his knees, Richard confidently called, "it's okay, I'm getting in the bus; it won't get any deeper". The door opened and Richard followed by a swirl of water, climbed in. I didn't stop; we couldn't risk the engine stalling. Driving at only a few miles an hour and with eyes fixed on the far bank, we crossed the half mile to the mainland. The relief on reaching the other side! But there was no time to rest; we had a Mail Boat to catch!

A few days later after a wonderful stay at the island hostel, we returned to the mainland; safely and on the same boat that we arrived.

(David has been a leader with Journeying since its earliest days)

Images:
Richard and Pilgrims, Insishbofin hostel
Returning to the mainland 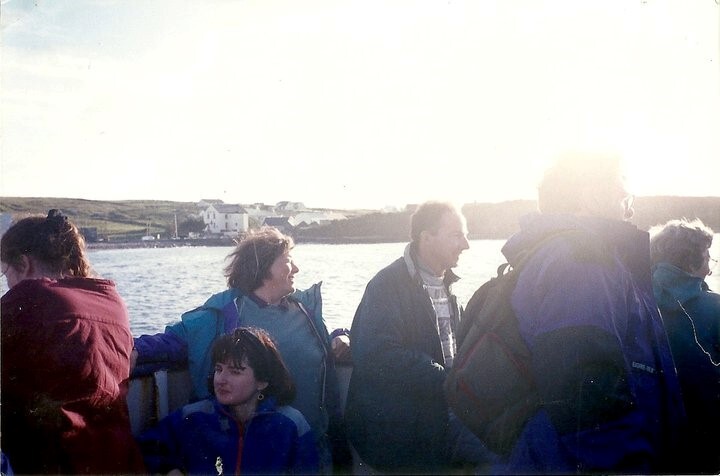