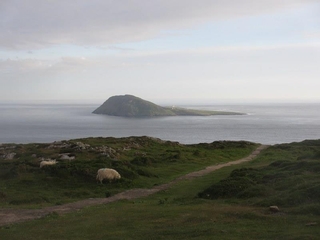 Some Reflections on Bardsey Island

I had the good fortune to spend the first five days of October 1996 at the hermitage on Bardsey Island. I am writing these reflections because, in the context of the current resurgence of interest in Celtic Christianity, I do not think the importance of Bardsey has been properly understood.

Iona is regarded as the most important island in Scotland associated with Celtic Christianity, and Lindisfarne has a similar importance in England, but Bardsey, which is the most important island in Wales associated with Celtic Christianity, is not so well known. I would like to make a few comparisons which will begin to establish the significance of this island for us today.

Firstly, the island, unlike Iona and Lindisfarne, was situated on the dividing line between the two major divisions within the Celtic culture. Scholars speak of the Brythonic Celtic culture, which was based in Wales, England, South and East Scotland and Brittany, and the Goedelic Celtic culture in Ireland, the Isle of Man and Western Scotland. Bardsey was and is part of Wales, but the Irish link was particularly strong. The monastic community was founded by Welsh saints like Cadfan and Dyfrig, but the Culdees ("friends of God") who originated in Ireland were also established on the island and the view for the islanders has always been westwards towards Ireland.

A second difference is that there are not many reminders of Celtic Christianity here. The ruined tower was built by the Augustinians when it replaced the Celtic community in the twelfth century. There are only two fragments of sculpted stone which are dated before the tenth century. Yet in spite of this lack, there is still the unmistakable sense of a "thin place", a doorway place from this world to the next.

Thirdly Bardsey does not have a famous saint identified with it, as Columba with Iona and Aidan and Cuthbert with Lindisfarne and yet it still unmistakably has the sense of being special because of much prayer. Dr Gwilym O Williams, Archbishop of Wales from 1971 to 1982 and one-time Chairman of the Trust, visited regularly and wrote:

"I see Enlli as a place of pilgrimage into fuller, deeper life
... the feeling I have is that the air of Enlli is impregnated
with spirit, as though the practice of prayer down the ages had
soaked into the soil ... It is a kind of school in which I can
come to know myself better ... it is a special place set aside
from the ordinary to be a means of encounter with deeper
reality".

Fourthly it has a stronger connection with death and resurrection. The saints came to live a resurrection life here and now, a life of anticipation of the great resurrection at the last day. This was their place to die, but also therefore their joyful place of resurrection. There are historical comments about the healthy atmosphere where disease was almost unknown and the monks were reputed to die at a good old age in strict order of seniority!

In an excellent little booklet called "Bardsey, a place of pilgrimage", the author Canon A M Allchin explains that even the physical geography of the island suggests death to the old world and welcome to the new. The mountain on the east side means that "the whole world of human thought and action, of suffering and achievement" is as it were blocked off. Unlike Iona and Lindisfarne, the houses are on the westward side with no view of the mainland. The western slopes and the fields look out across the sea to where occasionally in the setting sun the hills of Ireland, like an island of promise, may be seen.

The difficulty of the crossing is far greater too. No one is delayed by more than a few hours of high tide going to Lindisfarne and seldom is the ferry not able to cross the short passage to Iona, but for Bardsey you may have to wait several days to cross and your return date is no certainty! The sense of remoteness is increased by the total absence of commercialism and by the lack of any paved roads. There is no mains electricity either.

A sixth factor which is present on Lindisfarne and Iona but more pronounced on Bardsey is that there is no need to lock anything up. It is strange to stand by your door as you leave wherever you are staying and to inadvertently feel for keys in your pocket! There is therefore a sense of righteousness. In fact, there's also a lot of peace and joy so it's surely a place where the kingdom of God is manifested (see Romans 14: 17).

The effect of no television, radio, shops, cars, electricity, and telephone means that you feel you are in a time warp. The poet R S Thomas described Bardsey as a place where "tenses are out of place". "It's not so much a matter of past and future. The present moment becomes a moment of eternity" (A M Allchin).

Here is the poem by R S Thomas:

That Place
One particular
time after a harsh morning
of rain, the clouds lifted, the wind
fell; there was a resurrection
of nature, and we there to emerge
with it into the anointed
air. I wanted to say to you: "We
will remember this?" But tenses
were out of place on that great
island, ringed with the rain's
bow, that we had found and would spend
the rest of our lives looking for.
© Elodie Thomas

Here are three more significant quotes about Bardsey. The first is from 'A Life of Saint Dyfrig', who found his place of resurrection here; "It has for ages been a proverbial saying among the Welsh, that this island is "the Rome of Britain", on account of its distance ‑ it is situated at the extremity of the Kingdom ‑ and the danger of the sea‑voyage, and also because of the sanctity and charm of the place; sanctity for 20,000 bodies of the Saints, both confessors and martyrs lie buried here; and charm since it is surrounded by the sea, with a lofty promontory on the eastern side, and a level and fertile plain, where there is a spring of sweet water, on the western".

The second is from Father Derwas Chitty who described Bardsey as "the island of hermits, the island of the solitude where we are least alone." That is so true to my own experience!

"Fair Mary's isle, pure island of the pure,
The heir of resurrection, it is good to be in it ...
The creator who created me will meet me
In the fair parish of Enllils faithful".

The hermitage where I stayed is situated in a delightful place. It is located in Carreg Fawr barn, and consists of a ground floor with stone flagging which has a calor gas cooker, fridge, basin and tables. Water has to be collected from Carreg Fawr. Wooden steps lead up to a bedroom in the eaves. There is a bed, table and chairs, bookshelves and cupboards and a comfortable settee. Lighting is by gas light and candles. There is an amazing sense of prayerfulness in that room.

There is a journal for transient hermits, most of whom spent longer on the island than myself. opposite the barn is the pig kitchen, converted to a small oratory which is again very simple, but with such an atmosphere of stillness and the presence of God.

I found my time on the island, although so short, to be a contact point with eternity and therefore seemingly longer than five days. It is a place of receiving and a place where I felt I was able to gain a deeper understanding of aspects of Celtic Christianity and its relevance to us today.

Finally, I wrote these reflections on Hebrews 12: 22 24 on the day before I left the island.

I have come to you, Almighty God
Magnificent Creator, judge of all men,
I have come and the spirits of righteous men made perfect,
Have soaked this isle with prayer.

I have come in the flow of history and eternity
Shall I follow these saints of old?
I have come to pray and fast
And shall my prayers like theirs be heard?

Ah yes for I have come to Jesus
The mediator of the Covenant ever new.
We have come to meet Him at the mercy seat
On Enlli's hallowed soil. 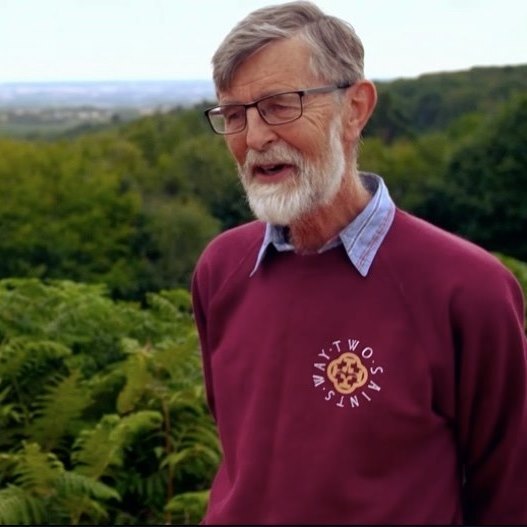