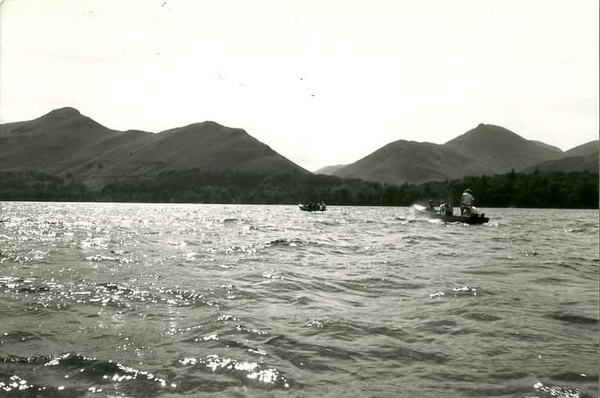 The beautiful Lakes, that collection of poetic landscapes, vistas and waters in the far north west of England - a favourite tramping ground of poets and pilgrims alike...
Bristol, Birmingham, the journey for many began with a pick-up in the minibus. "Hello and this is... and shall I put your bag on the roof?" And then we were off again; Lancaster, Preston... Two hours at a stretch, no more and then a break for refreshment, often at a motorway service station - I came to like these places; little Oasis on the journey north.

It was well past midnight when minibus, car and caravan took a left off the main 'A' road and drove quietly into 'Little Howe' campsite, by Thirlmere. Exhausted, that July night we fell asleep to the sound of sheep bleating and the occasional bark from one of the farm dogs, upset by our late arrival.

The following morning and pulling back the curtains of the caravan and opening flaps on tents, one-by-one we looked out on all that was hidden from view the night before. We were camped just across the wall from the farmhouse, in a slight hollow, gently sloping away toward the beck and woodland beyond. Dry stone walls kept the sheep from straying. Above, the cloudless blue sky offered a superb canopy to a wonderful pastoral setting.

Breakfast was leisurely, Mary, super fit and in her seventies, had a map spread out on the bonnet of the car; Sarah fed the baby while Stuart arranged a carry-cradle to go on his back; Richard, walk leader and in his early twenties, drank tea and smoked his pipe; the children played in-between eating cereals and toast; others gathered around the kettle; and everyone watched the shepherd move his flock from our field to the one next door. Then in the warm morning air, we made our way to the little wooden bridge over the beck where we gathered, as we were to do each morning, for a short time of worship, thanking God on this first morning for bringing us to such a glorious place.

Today's walk would take us at a gentle pace over the hills to peaceful St. John's-in-the-vale, a round trip of about eight miles. Two led: Richard from the front, a fount of Lakeland knowledge; and Chris, a ready companion for any who tired and dropped to the back.

Chatting and walking everyone got to know each other; Richard, another Richard, in straw hat, shorts and striped tee-shirt, a 'Swallows and Amazons' lad from the 1930's on holiday again, but this time retired and with the quiet, humble air of one who lived the words; 'make me a channel of your peace'; Audrey with her Church responsibilities; Stuart and Sarah with their young family... a group of perhaps twelve.

The little Church of St. John's-in-the-vale nestles in an isolated spot under the craggy slopes of the Helvellyn Range. Its doors were open and so we slipped in.

The following day and a contrast in weather; low cloud hung over the hills. Visibility above 500 metres would be poor, potentially thwarting plans for our walk over the third highest fell in the Lake District, mighty Helvellyn itself; and a rendezvous in Glenridding with local Catholic Priest, Fr Francis Hughes. A wonderful man who was to become a good friend of Pilgrim Adventure and who, until he was too old and ill, loved nothing more than to climb the great hills.

A call was made to the Met office... "Good news!" Chris called, "the cloud's lifting, we should have clear views by the time we reach the summit!"

That morning we said our prayers in lovely Wythburn Church - a simple 17th century building, standing in the shadow of Helvellyn. Whitewashed and on this day surrounded by long dewy grass, it was described by Hartley Coleridge, eldest son of the romantic poet, Samuel Taylor Coleridge, as 'Wythburn's humble house of prayer'. Behind the Church a track led steeply toward the summit of Helvellyn.

It was an elated if weary group that eventually wended its way from the summit, along the shore of Ullswater, to the unassuming Church of St Phillip Howard and late afternoon mass. Fr Francis was in good form. He had baked cakes and made sandwiches in readiness for our arrival. We sat on the Presbytery lawn in the warm sunshine after the service and ate and talked.

'Imagine a little Church that seems to grow out of the fell-side and a little house where the whole world was welcome...' Fr Francis died in the autumn of 1998 and these words written in his obituary in the Catholic Times; sum up the man whose legacy not only included the Church building that he had built, but a glow of friendship and warmth that radiated to the four corners.

Another day and the dew on the grass was already steaming in the early morning heat as we gathered on the little wooden bridge. Two black cattle stood motionless in mid-stream staring at us as we sang verse upon verse of 'All things bright and beautiful.' As we approached the final verse and without warning, they suddenly turned and with much splashing headed for the bank and quieter pastures.

That afternoon we hired two wooden motor boats and set off across Derwent Water to explore the island named after the seventh century saint, Herbert, who lived on Derwent Water and brought Christianity to the region. The journey was at first a race between two crews, as is the custom of folk suddenly let loose upon water... but soon the gentle throb of the engines took the edge off our competitive zeal and we settled to more leisurely island watching, as first one small island and then another came into view and then gently slipped past. In time, the wooded holy isle itself appeared. We beached our boats on the pebbled shore - and then hauled the heavy, wet timbers a bit further, just in case.

Fallen branches and thick undergrowth made finding the remains of the islands Chapel and likely site of St Herbert's dwelling, no easy task. A cluster of stones close to the centre of the island seemed to offer the most plausible location, and with a little imagination we were transported back 1500 years.

Mary read a passage from Mark's Gospel, and Richard, a Diplomat before retirement, gave an informative talk about the need for dialogue between Christians and Muslims. Sometime later we made our way thoughtfully back to the beach. 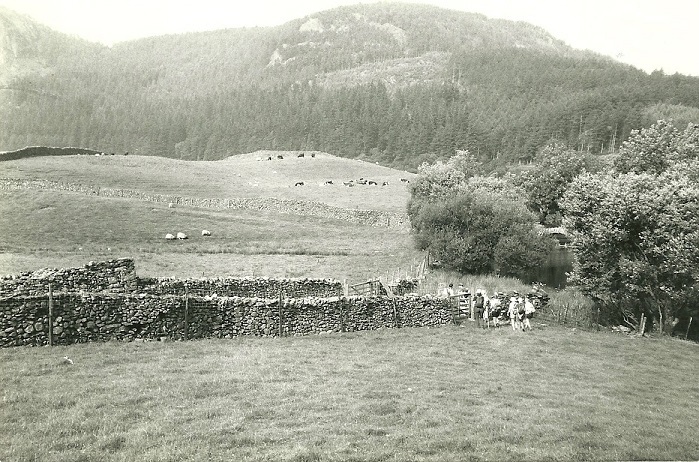 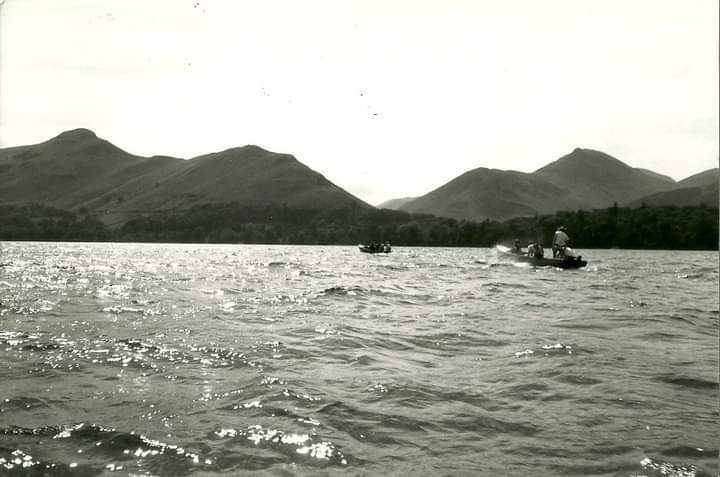 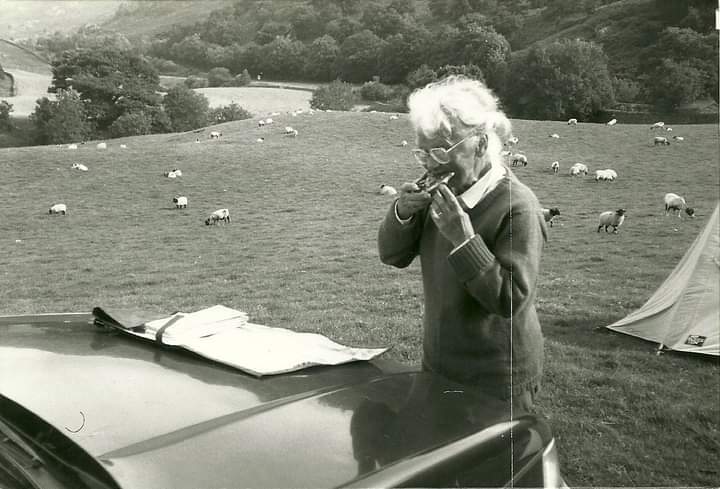 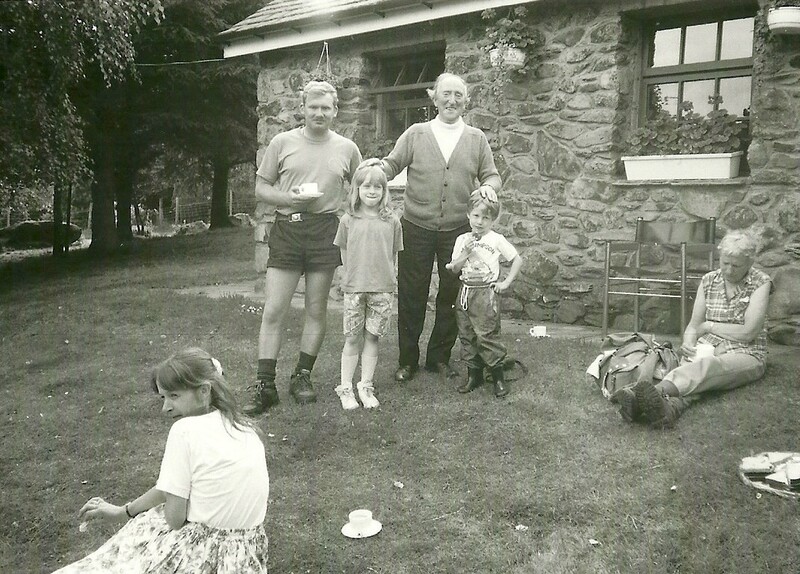