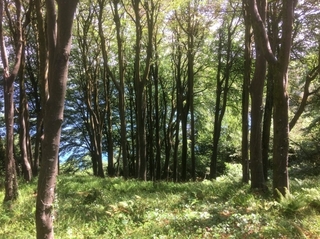 Back in the twelfth century Bernard of Clairvaux said "You will find something more in woods than in books. Trees and stones will teach you that which you can never learn from masters."

He was one of the most influential medieval Cistercians who was at the heart of the first wave of expansion of the Cistercian monastic Order as it spread out from its origins in Citeaux. There were once many monasteries and hermitages on The Way of St David. Now, only the names remain but I like to remember Bernard at Monk Haven. Bernard was called on to mediate in the political and church affairs of the day and he wrote a wide range of theological texts. But it is this quote that particularly speaks to me as I walk in the woods here. As Bernard notes, God speaks through the natural environment and there is no place better than the Way of St David to see this in such a beautiful, inspiring way as we embrace more fully the our beautiful surroundings. Our love of natural environment and the way in which it conveys God's presence is not new. It was at the very start of the Cistercian movement. (Image: woodland near Monk Haven on the Way of St David pilgrimage).